My brush with Reality TV

"Hi, I am interested in renting your room. We're shooting a docu series for Finnish TV. We need a place where we can freely film our occupant and their life. The occupant is an au pair from Finland working and living in Sydney for 3 months."

This was not your run-of-the-mill airbnb guest request and my initial reaction was "yikes, steer clear of that". I checked into the background of the enquirer and found very mixed reviews; it may not be that easy to find people comfortable with this proposition. So I softened, doubled my price, and sent back my terms. They agreed.

You know the arrival shot where the host opens the door with a look of fake surprise, like they had no idea there was someone out there. What really goes on before that? I've always wondered. And now I know...

It is true that I was opening the door to the "star" of the show for the first time. In fact, I'd had no contact whatsoever with her in the entire lead-up to that moment—something that is not normal with my guests and, I think, a contributory factor to the end result.

So, before the star arrived, fairly late in the evening, around 9:30pm, the 'director' arrived at my door—hi, how do you do, I'm the director, may I see the room, ok, I'll be back—she came in and looked around and called in the cameraman. They huddled and discussed lighting and camera angles for a bit. Then turned to me.

Before that moment, I was hoping to stay out of the picture altogether, but the director reassured me that it was Finnish TV and terrible odds of it ever appearing anywhere else in the world, especially since it's all in Finnish. So heck, nothing to fear here, I signed the 'release' form declaring they could film me, and my place, and do whatever they wanted with the footage for the rest of eternity. Whatevs.

They promptly left—We'll be back. Ok. So. I sat on the couch twiddling my thumbs wondering when. Ten minutes. They came back.

The cameraman had a tripod and one of those big square lighty things you might've seen that throws white light on interview subjects. He gave me one of those microphone packs you see tucked into the back of the girls dresses and had me hide it inside my clothing. They looked around some more and we turned all the lights on. I chatted conspiratorially to the Australian cameraman.

And they all left. Me. Couch. Ten minutes.

A new face came in—the door was left open by this stage—Hi I'm the producer, can I see the room— this is the woman with whom I'd negotiated the booking via email.

And she left. But this time the door was shut behind her and. Me. Couch. Five minutes... Knock! Knock! 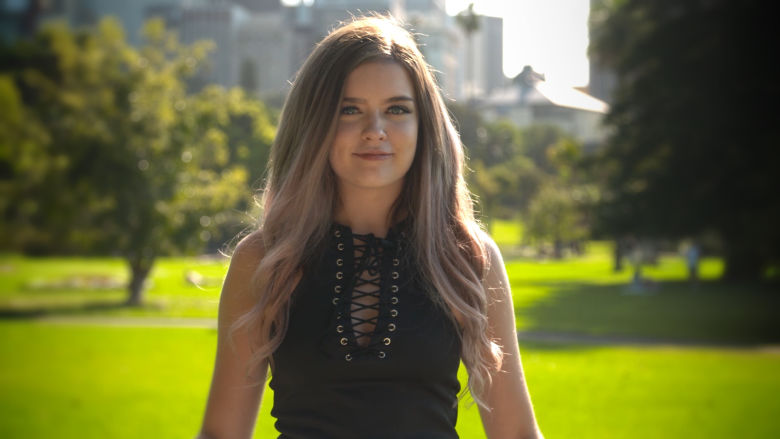 Who could this be? I opened. And, yes, it's true, I'd never met this person before and didn't even know her name (Susa), and here she was at the door. For her part, same deal: she'd never met me. It was all–ostensibly–genuine; so not that at all.

Crucially, she had no goal to evaluate the space as somewhere acceptable to sleep, or me as a person who could be trusted under the same roof. It was not her decision. So we played our parts well enough, but the absence of this critical freedom with a real guest arrival, made it odd. She was like—Hi, yep, here I am. I'm used to ignoring the people behind us, just show me where to stand and take your turn. Usually guests arrive chatty and keen to tell me about their journey, where they'd been, and to learn more about the place, and me, and swap stories.

With cameras rolling, we were like passengers on a bus; enduring it and waiting for the end of the ride. So I ran through my usual welcome routine, showing the guest where everything is, the rules of the house, the local points of interest. She watched politely. No questions. Not a word uttered. I wondered about her level of English. Aaaand CUT!

The team said—thanks, that was great, you're a natural, please don't look at the camera. Now, let's do a scene of the subject opening her bags and settling into the room. I hung back and watched with curiousity, trying to keep out of sight because I didn't want to contribute to her feeling like a performing seal.

They sat her down on the bed and fiddled around with the lighting. The director settled in opposite. This was the little-deeper how-are-you-feeling piece to camera. The director started asking questions in Finnish. This went on for a while, and a while more, and eventually I lost interest altogether and went back to my computer to while away some time. They talked for thirty or fourty minutes.

It was nearing 11pm and they were done and started packing up. There was some discussion that they would be back for her in two nights and film her departure. And finally they left. I saw them to the door and turned back to the guest, hoping to get a more genuine sense of her without the pressure of the crew, but her door was already closed; she was done.

I pottered around doing my evening routine, washing dishes and brushing teeth. She came out for a moment and I tried to make conversation but she was clearly exhausted. I got an affirmative response to 'tough day?', and a gesture of confirmation that she had not felt safe at the home where she'd been*. I wanted to reassure her that she was safe and they were gone and to help her relax, but who trusts a complete stranger who says "trust me", so gave up and left her to herself.

* The cameraman earlier revealed to me that she'd been placed with a family in South Granville—a suburb of Sydney not strongly associated with safety, affluence, or wealthy families in fancy houses and the propensity toward having a nanny. Moreso the opposite. The cameraman winked that maybe the placement was deliberately chosen to create tension.

I went to bed and the guest light stayed on until after I'd fallen asleep. At about 4:30AM I got up for the bathroom and saw the guest bedroom door open. Maybe it was too hot with the door closed? I couldn't see the bed, and didn't dare look in, but continued back to bed. Yet my mind processed it. Door open? Luggage gone? Not my business. Or is it? At length, unable to sleep with the puzzle, I got up for closer look.
The room was empty, the bed unslept in, the key left on the bureau. My guest was gone!

It was pouring rain outside. There is no public transport after midnight. The only option was an expensive taxi ride. And where would she go? Was she huddled in the cold and wet? In an unfamiliar city, in a land far, far from home? I was a bit worried about this turn of events. What should I do?

I didn't have any phone or contact details for her. A Finnish phone number for the producer wasn't any use. But, at 18 years old, an adult, she's free to leave if she wants to, so I concluded notifying police was not required. All I could do was email the producer to inform that her charge was gone. I did so, and went back to bed—see what the morning turns up.

The producer got back to me at about 9AM thanking me for the note and stating that my guest told her that she'd gone to stay at a friend's instead. I guess she took off as soon as she figured I was asleep; about midnight. I was a little hurt that she felt a need to escape, but I can understand how natural it would be to include me as part of the system she sought to escape from. My guess is that the placement in Granville was traumatic, and she had so little sense of control over her situation, that sneaking away in the middle of the night was the drastic action neccesary to reclaim her life.

I wonder if she continued with the program?

The Au pairit website (in Finnish)
My guest, for a few hours, was "Susa".